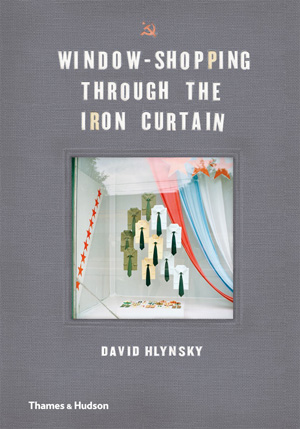 Window-Shopping through the Iron Curtain presents a selection of more than 100 images of shop windows shot by David Hlynsky during four trips taken between 1986 and 1990 to Poland, Czechoslovakia, Hungary, Yugoslavia, Bulgaria, East Germany, and Moscow. Using a Hasselblad camera, Hlynsky captured the slow, routine moments of daily life on the streets and in the shop windows of crumbling Communist countries.

The resulting images could be still-lifes representing the intersection of a Communist ideology and a consumerist, Capitalist tool—the shop window—with the consumer stuck in the middle. Devoid of overt branding or calculated seduction, the shop windows were typically adorned with traditional yet incongruous symbols of cheer: homey lace curtains, paper flowers, painted butterflies, and pictures of happy children. Some windows were humble in their simple offerings of loaves and tinned fishes; others were zanily artistic, as in the modular display of military shirts in a Moscow storefront; and some illustrated intense professional pride, such as a sign in a Prague beauty salon depicting a pedicurist smiling fiendishly over an imperfect sole.

The photographs are accompanied by essays by art historian Martha Langford and cultural studies specialist Jody Berland, as well as Hlynsky’s own account of his time as a flâneur in the shopping plazas of the collapsing Soviet empire—“a vast ad-hoc museum of a failing utopia” that in 1989 began to close forever.

There's an undeniable wistfulness to the collection of images. It might raise some sense of guilt for us privileged Westerners, but perhaps we might find something quaint in the windows' minimalism and homely design, their lack of urgency.

As the Soviet Union and its satellite states were crumbling, David Hlynsky took a novel approach to documenting the monumental changes…The 176 photographs in the book—of hair salons, toy stores, bookstores, art galleries, restaurants—offer a nostalgic look at a lost world.

A heroic endeavor, both historically and artistically…The images are simple and respectful; they are of a piece with the poignant austerity of their subject matter. They are also artful: cleverly framed, and hip to the play of reflections and angles. Hlynsky caught that moment when the tectonic plates of the late twentieth century were shifting and the Cold War was ending. These windows, retrospectively picturesque, are the vestiges of a lost utopian ideology.

Space is taken up with a sad-looking vase of plastic flowers, or an elaborate swoosh of drapery. Everything looks both overly bright and covered in dust. These shop windows are informative, but they are not seductive. And to those of us living in this consumer-driven society, that in itself is fascinating.

This is one of those books which affirms the occasional power of images over even the most thoughtful worlds. The 176 photographs …speak out so loudly and clearly here…Without being repetitive, they manage to produce a holistic portrait of a society of privation.

His photos capture a world on the brink of collapse, one in which a strange blend of Communism and consumerism converge.

David Hlynsky is a photographer, curator, and editor based in Toronto. He was founding editor of the alternative photography magazine image nation, and his own photographic work has appeared in numerous exhibitions and is held in collections worldwide.

Martha Langford is Professor of Art History at Concordia University, Montreal, and editor-in-chief of the Journal of Canadian Art History.

Jody Berland is Professor in the Department of Humanities at York University, Toronto, and editor of TOPIA: Canadian Journal of Cultural Studies.