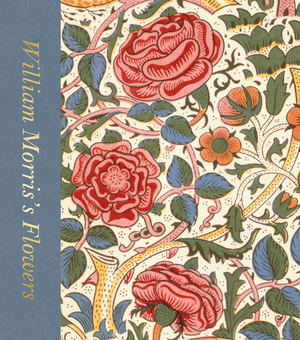 The leading figure of the Arts and Crafts Movement, William Morris (1834–1896) is one of the best-known and most popular of all British designers. A passionate advocate of craftsmanship over mass production, he designed a huge variety of objects, but it is his spectacular carpet, fabric, and wallpaper patterns that have continued to capture the popular imagination and influence interior designers and the decorative arts. Around six hundred such designs are attributed to Morris, most of which are based on nature, including trees, plants, and flowers.

This beautifully designed, accessibly priced gift book offers a wealth of designs by Morris where flowers are the principal motif. The text traces the origins of Morris’s flower-based designs: his own gardens at the Red House in Kent; sixteenth- and seventeenth-century herbals; illuminated medieval manuscripts; late medieval and Renaissance tapestries; and the range of decorated objects, particularly from the Islamic world, that Morris studied at the South Kensington Museum, now the Victoria and Albert Museum.

Authored by Rowan Bain, senior curator at the William Morris Gallery, and lavishly illustrated with over one hundred color illustrations, William Morris’s Flowers will both inform and delight.

This soothing collection of over 100 floral-forward prints created in the 19th-century by British textile designer William Morris, traces the designs back to Morris’s own gardens in Kent, England, and medieval-era manuscripts and tapestries.

Rowan Bain is senior curator at the William Morris Gallery, Walthamstow, London, and was formerly assistant curator at the Victoria and Albert Museum. She is the author of several books and a contributor to May Morris: Arts & Crafts Designer, which accompanied the William Morris Gallery exhibition “May Morris: Art & Life,” of which Rowan was cocurator.