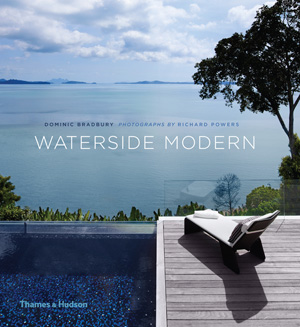 The most luxurious homes in the world incorporate elements of the surrounding environment into their design, and waterside homes bespeak a particular kind of luxury. Waterside Modern is a dream tour through some of the most beautiful modern homes in the world, all set against spectacular views of lakes, rivers, and oceans. From California to Long Island, Sydney to Singapore, South America to Europe and the Mediterranean–some of the most beautiful countries in the world provide the backdrop for twenty-five architect-designed single-family houses that make the most of their desirable settings.

By maximizing the link between indoor and outdoor space, using local materials, and emphasizing spectacular views, each structure celebrates an outdoor lifestyle while protecting its inhabitants from the elements. Loosely grouped into three sections—beach house, ocean belvedere, waterfront villa—this beautifully photographed volume will inspire architects and interior designers, while serving as a rich visual escape for those who love fine homes.

Dominic Bradbury is a journalist and writer specializing in architecture and design. He writes for many magazines and newspapers in the UK and internationally, including Wallpaper*, World of Interiors, House & Garden, Vogue Living, The Telegraph, The Times, and the Financial Times. His many books include Mid-Century Modern Complete, The Iconic Interior, Mountain Modern, Waterside Modern,  and most recently, Off the Grid: Houses for Escape.

Richard Powers is a photographer specializing in interiors, architecture, and the built environment. His books include The Iconic Interior, Beyond Bawa, and New Paris Style.