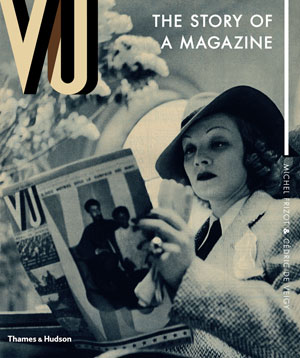 Established in Paris in 1928, VU combined stunning photography with dynamic layouts and first-rate reporting, creating a revolution in journalism and setting the stage for future photo magazines like Life, Stern, and Paris Match.

VU covered a wide and eclectic range of subjects including politics, world affairs, social issues, discoveries, exploration, the arts, sports, and entertainment. It intended to be an illustrated journal of the week’s events—a movie newsreel on paper—and published work by some of the most important photographers of the time: Robert Capa, André Kertész, Henri Cartier-Bresson, Brassai, Man Ray, and more.

This book gathers some of the best work from more than 600 issues of VU: covers, double-page spreads, and complete reports. It provides both a record of the prewar world of the twenties and thirties, and an unparalleled history of photojournalism in the early twentieth century.

Represents the burgeoning of passion for photographic imagery that would affect human communication well into the future…sensational, graphic, beautiful, and horrifying

Cédric de Veigy teaches and writes about photography and film. He lives in France.

Michel Frizot is Research Director at the Centre Nationale de la Recherche Scientifique in Paris. He lives in France.