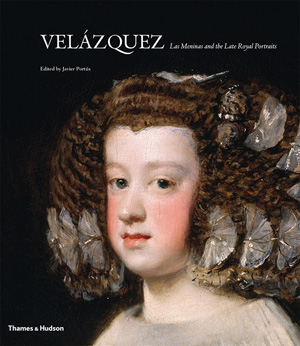 Diego Velázquez was one of the most important and influential painters in the Spanish Golden Age and the leading artist in King Philip IV’s court. To accompany an exhibition at the Museo Nacional del Prado in Spain, this book analyzes the development of Velázquez’s court portraits from his second trip to Rome in 1649 to his death in Madrid in 1660, a period that saw the creation of some of the greatest of all masterpieces within this genre, such as Las Meninas.

Also included are portraits produced in Velázquez’s circle that focus on the complex process behind the creation of the royal image. The book traces the subsequent development of the Spanish court portrait after Velázquez’s death when artists such as Mazo and Carreno reinterpreted his ideas, resulting in innovative contributions to the genre in their depictions of Margarita of Austria, Mariana of Austria, and Charles II.

Will demystify the creative process of Velázquez.

A good addition to a Velázquez shelf and valuable for its revelations about portraiture for a monarchy that was running out of Hapsburg heirs…Recommended.

Javier Portús is a curator and the head of the department of Spanish Painting (until 1700) at the Museo Nacional del Prado, Madrid.

Miguel Morán Turina is a Professor of Art History at the Universidad Complutense de Madrid.

Andrea Sommer-Mathis is on the staff of the Commission for Culture Studies and History of Theatre (Austrian Academy of Sciences) in Vienna.