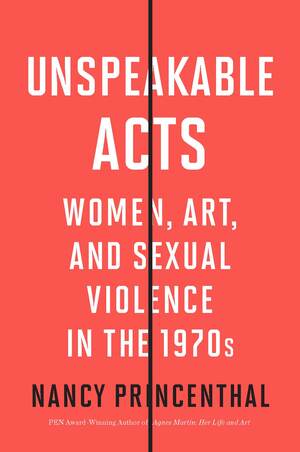 The 1970s was a time of deep division and newfound freedoms. Galvanized by The Second Sex and The Feminine Mystique, the civil rights movement and the March on Washington, a new generation put their bodies on the line to protest injustice. Still, even in the heart of certain resistance movements, sexual violence against women had reached epidemic levels. Initially, it went largely unacknowledged. But some bold women artists and activists, including Yoko Ono, Ana Mendieta, Marina Abramovicé, Adrian Piper, Suzanne Lacy, Nancy Spero, and Jenny Holzer, fired up by women’s experiences and the climate of revolution, started a conversation about sexual violence that continues today. Some worked unannounced and unheralded, using the street as their theater. Others managed to draw support from the highest levels of municipal power. Along the way, they changed the course of art, pioneering a form that came to be called simply, performance.

Award-winning author Nancy Princenthal takes on these enduring issues and weaves together a new history of performance, challenging us to reexamine the relationship between art and activism, and how we can apply the lessons of that turbulent era to today.

An important, engaging exploration of a decade of revolutionary artmaking…Nancy Princenthal's meticulous research, clear writing, and thematic structure translates the variances of work by iconic artists and underknown practitioners alike, through a framework that illuminates without sensationalizing and theorizes without losing emotional weight.

A galvanizing work that seems bound to inspire artists for many years to come.

Nancy Princenthal speaks of the unspeakable brilliantly, bravely, thoroughly, and thoughtfully. She addresses art, literature, theatre, film and video games… and the real life politics they reflect, offering a long overdue look at creative coverage of rape, domestic violence, and other acts. In the process she has also written one of the best recent books on feminist arts.

Nancy Princenthal is a New York-based writer. A former senior editor of Art in America, where she remains a contributing editor, she has also written for the New York Times, Parkett, the Village Voice, and many other publications. She is currently on the faculty of the MFA art writing program at the School of Visual Arts. Her previous book, Agnes Martin, won 2016 PEN/ Jacqueline Bograd Weld award for biography.