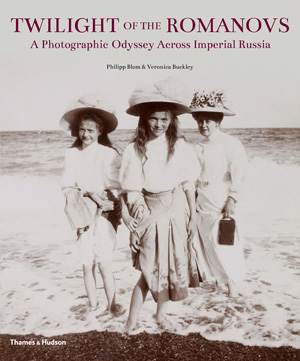 The Russian Empire was among the most mysterious of the world’s great powers, profoundly torn between a rural population living almost medieval lives and industrial and social change in the cities. The tsar’s gigantic realm struggled with the advent of modernity and with its own internal contradictions between Asia and Europe, faith and science, different ethnic groups, and the divergent interests of the aristocracy, the middle classes, the urban workers, and the rural poor: a continent of contradictions from abject poverty to fairy-tale wealth captured by authors from Tolstoy to Chekhov, from Gogol to Gorky.

Twilight of the Romanovs opens a door into the world of pre-revolutionary Russia using original photographs taken during the last decades of Romanov rule. They include remarkable color images created using an early three-color-plate technique that brings the remote past to life. Our companions on this journey include the Scottish photographer William Carrick, Americans George Kennan and Murray Howe, the German-Russian Carl Bulla, Sergey Produkin-Gorsky, and the writers Leonid Andreyev and Anton Chekhov, together with many anonymous others.

These photographs are snapshots of a vanished world, yet they reveal a surprising continuity: despite the subsequent revolution, faces, buildings, and landscapes still resonate with those who see them a century and more later.

The color imagery is …haunting … cold stares coupled with bright clothes, and breathtaking landscapes …these are photographs that have not been highlighted in the eye of the public.

The early color photographs in the book are poignant and startlingly immediate, whether they depict cornflowers in a field of rye or a group of friends at a dinner party.

Philipp Blom’s publications include  A Wicked Company and The Vertigo Years: Change and Culture in the West, 1900-1914.

Veronica Buckley is the author of Queen Christina and Madame de Maintenon.