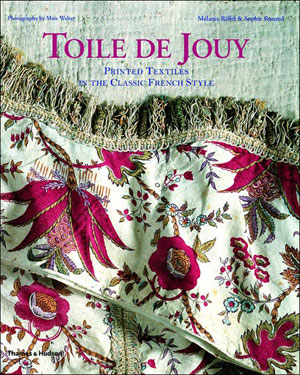 In the seventeenth century, printed and painted cottons from India first appeared in France. In reaction to the enormous commercial success of these bright Indian cottons, a French embargo was placed on the importation of foreign textiles. In 1759 this ban was finally lifted, and in 1760 the Manufacture Royale de Jouy was founded in Jouy-en-Josas, near Paris, to produce printed cotton fabrics on French soil that could compete with the popular imported ones.

At first the factory produced polychrome cottons with floral or plant motifs that were intended for clothing. Subsequently, the “monochromes” appeared; adorned with rural, historical, mythological, narrative, and oriental themes, they were used mainly for home furnishings. Within a few years, the factory was the biggest of its kind in Europe, and its printed textiles had become widely used in France and abroad. In all, some 30,000 designs were created at Jouy-en-Josas through the years, many of them the work of renowned eighteenth-century artists such as Fragonard and Boucher.

The authors, both curators at the Musée de la Toile de Jouy, have drawn upon the museum’s rich collections to produce the first-ever complete history of these textiles. The illustrations include original designs that are conserved in the museum, exceptional historical examples of toile de Jouy clothing and furniture, documents relating to manufacture and to the founding of the company, and examples of contemporary uses of the textiles.

Toile de Jouy has become increasingly popular among designers and decorators, who incorporate its classic patterns in upholstery, wallpaper, bed linens, tablecloths, napkins, and stationery. For anyone interested in the history of textiles and design, or looking for fresh ideas for interior decor, this book will be an essential reference.