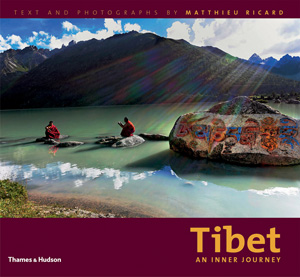 “Tibet is the Roof of the World, a place where you feel that you arein the sky just as much as you are on the earth. The intense blueness of space contrasts sharply with the deep green of eastern Tibet’s rolling grasslands and the mineral colors of the west with its expanses of barren rock. For over a thousand years, Buddhist culture has been at the heart of Tibetan society, and anyone who has traveled across the high plateaux will understand how this contemplative civilization flourished in a landscape of such vastness.”—Matthieu Ricard, from the Introduction

Here Ricard seeks to bear witness to all that survives of that ancient world—a world capable of making a valuable contribution to contemporary life. He provides a glimpse of a unique culture that is desperately trying to preserve its authenticity, despite the major upheavals that have shaken the land of its birth.

Has captured the spirituality, purity and courage of the people of Tibet, along with the beauty of their homeland.

Matthieu’s spiritual life and his camera are one and the same, and it is from this unity that these fleeting yet eternal images spring.

The Dalai Lama’s French interpreter since 1989, Matthieu Ricard lives in the Shechen Monastery in Nepal.