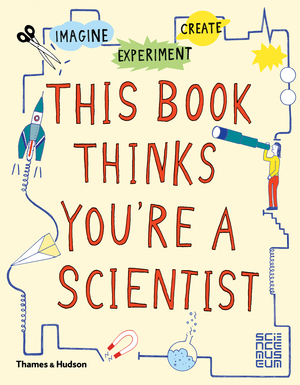 This Book Thinks You’re a Scientist, developed by the Science Museum, London, as a complement to their new interactive gallery for children, explores seven key scientific areas: force and motion, electricity and magnetism, earth and space, light, matter, sound, and mathematics. Each spread centers on an open-ended question or activity, with space on the page for the child to write, draw, or interact with the book. Bend water with static power. Pack a suitcase for a trip to space. Design a new musical instrument. At the end of the book, there is a section for children to record their own guided independent investigations, including surveys and space to log the results of their experiments.

Hand-drawn illustrations and a collage-style photographs encourage creativity and help children to think like a scientist by noticing details, questioning everything, and dreaming up new ideas.

Playfully illustrated with sketchlike cartoons and doctored photos, this activity book is inspired by Wonderlab: The Statoil Gallery, an interactive exhibit opening at the Science Museum in London in October 2016. Seven core subjects are addressed through simple activities [that] encourage imagination, curiosity, and careful observation. Readers are invited to add their observations and conclusions into the scrapbook-style pages.

Harriet Russell studied at Glasgow School of Art followed by Central Saint Martins. She has worked for many commercial clients, including the New York Times and Channel 4.