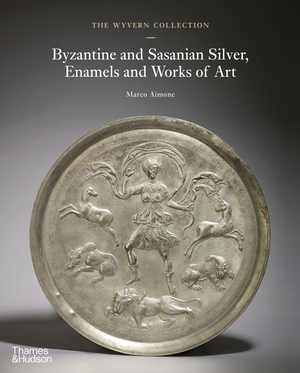 Late antiquity and the early Middle Ages, once viewed as periods of decline after the grandeur of Greece and Rome, are now understood as times of extraordinary skill and creativity in the decorative arts. This was particularly true in the Eastern Roman Empire (Byzantium), with its deep cultural links connecting the Mediterranean world and the East. Many spectacular artifacts from this period (4th-15th century CE) can be found in the Wyvern Collection. They include enameled gold devotional medallions, crosses, plaques, and jewelry; silver and semiprecious stone vessels; liturgical objects from Palestine, Anatolia, and Syria; and a wide variety of Late Roman, Sasanian, and early Islamic artifacts. Masterpieces of great significance to art history, a fifth-century Artemis missorium and an eleventh-century enameled enkolpion from Constantinople are among the highlights.

Byzantine and Sasanian Silver, Enamels and Works of Art, by Byzantine metalwork expert Marco Aimone, is augmented by three essays from specialist scholars: Jack Ogden describes the techniques of enameling; Peter Northover examines the composition of the silver vessels; and Erica Cruikshank Dodd analyzes the chronology of the stamps (hallmarks) on Byzantine silver objects. This third volume in the Wyvern Collection series continues to reveal and inspire, sharing the exhilarating experience of history through skilled and impassioned collecting.

Marco Aimone is a scholar of late antique and medieval archaeology and a former Dumbarton Oaks fellow. He has published extensively on the precious metalwork and epigraphy of the Migration Period. Since 2015, he has been a senior advisory curator for the Wyvern Collection.