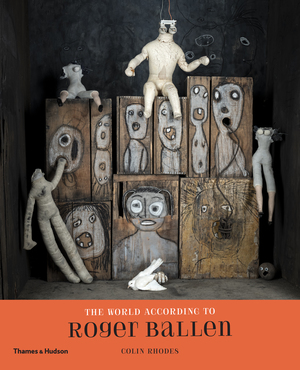 This generously illustrated book catalogs Roger Ballen’s photographic work throughout his career and new installations created specifically for an exhibition at the Halle Saint Pierre, Paris.

The World According to Roger Ballen, coauthored with Colin Rhodes, looks at Ballen’s career in the wider cultural context beyond photography, including his connections with and interest in art brut. It features photographs selected from across Ballen’s career, along with installations created exclusively for an exhibition at the Halle Saint Pierre, Paris, and examples of objects and works from Ballen’s own collection of art brut.

Organized thematically, with texts by Colin Rhodes and an introduction and interview with Ballen by Martine Lusardy, the director of the Halle Saint Pierre, The World According to Roger Ballen is both a catalog of the first major exhibition of Ballen’s work in France, and an exploration of Ballen’s place within and connections to the wider context of modern and contemporary art.

Colin Rhodes is an artist, writer, curator, and educator. He has published widely on modern and contemporary art. He is author of Primitivism and Modern Art and The World According to Roger Ballen (both published by Thames and Hudson), a contributor to The Burlington Magazine, and a contributing editor of Raw Vision. He led the art schools at Loughborough University and the University of Sydney and is currently distinguished professor, Xiaoxiang Scholar and Yangtze River Scholar in the Fine Arts Academy, Hunan Normal University, China.

Roger Ballen is one of the most important and distinctive art photographers working today. His previous books include Asylum of the Birds, The Theatre of Apparitions, and Ballenesque: Roger Ballen: A Retrospective.