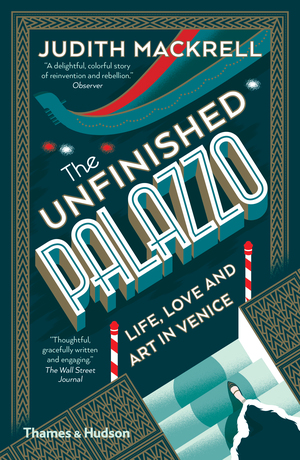 Commissioned in 1750, the Palazzo Venier was planned as a testimony to the power and wealth of a great Venetian family, but the fortunes of the Veniers waned during construction and the project was abandoned. Empty, unfinished, and decaying, the building was considered an eyesore until the early twentieth century, when it attracted and inspired three women at key moments in their lives: Luisa Casati, Doris Castlerosse, and Peggy Guggenheim. Their extraordinary, acclaimed story is now available in paperback.

Luisa Casati turned her home into an aesthete’s fantasy, where she hosted parties as extravagant and decadent as Renaissance court operas, spending small fortunes on her own costumes in her quest to become a “living work of art” and muse. Doris Castlerosse strove to make her mark in London and Venice during the glamorous interwar years, hosting film stars and royalty at glittering parties. In the postwar years, Peggy Guggenheim turned the Palazzo into a model of modernist simplicity that served as a home for her exquisite collection of modern art. Each vivid life story is accompanied by previously unseen materials from family archives, weaving an intricate history of these legendary art world eccentrics.

Judith Mackrell is a dance critic and author.