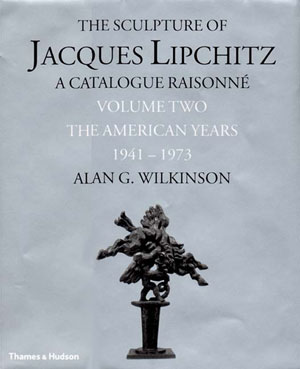 This is the second of a two-volume catalogue raisonne of the work of Jacques Lipchitz, one of the greatest sculptors of the twentieth century. Volume One: The Paris Years 1910-1940 was published by Thames and Hudson in 1996. Volume Two documents and illustrates all the known sculptures that Lipchitz created during the second half of his long and prolific career, from his arrival in New York on June 13, 1941, until his death on Capri on May 27, 1973. Lipchitz’s reputation as one of the masters of modern sculpture has long been based on the great Cubist carvings and bronzes of 1915-25 and on the experimental “transparents” of 1925-30. Although the sculpture from the American years has been widely exhibited, little serious critical attention has been paid to the iconography, the stylistic diversity, the spontaneity and boldness, and the technical innovations of this work. The 403 sculptures cataloged in Volume Two will provide, for the first time, the opportunity to reassess Lipchitz’s late work. During the American years commissions occupied more and more of Lipchitz’s time and energy. The preparatory studies for each work have been catalogued with the definitive bronze, allowing us to follow the evolution of the projects, from maquettes to monumental sculpture. In contrast to the large scale, public commissions, Lipchitz created the thematic “series” sculptures, which are a unique feature from the second half of his working life. In these intimate, deeply personal works, which he described as “small experimental pieces in which I am exploring new directions and new ideas,” Lipchitz gave free rein to his explosive imagination.The authoritative two-volume catalogue raisonne, which will remain the definitive guide to Lipchitz’s work, is essential for all those interested in twentieth-century sculpture.