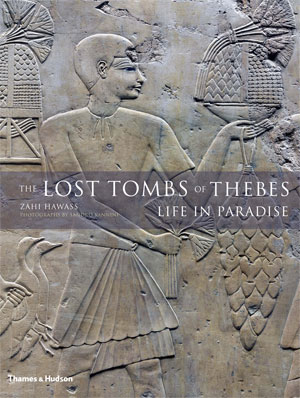 The foothills of the Theban massif, not far from Egypt’s Valley of the Kings, are filled with hundreds of impressive tombs from the New Kingdom belonging to the people who served the pharaohs. Just a handful are open to the public; many others are closed and can be visited only by scholars; still others have been hidden under villages built over the past centuries and have only recently been discovered.

Written by world-renowned Egyptologist Zahi Hawass and illustrated with spectacular new photographs by Sandro Vannini, this new book gives an unprecedented access to these largely inaccessible tombs. It reveals some of the most exquisite examples of Egyptian art to be found anywhere in the land of the Nile, reflecting the aristocratic status of the tombs’ owners.

At the heart of the book, three major chapters examine the glorious paintings and exquisitely sculpted reliefs that depict daily life on earth and life in paradise. Other chapters place the tomb owners in their historical context, explore the architecture and construction of the tombs, display the lavish burial equipment, and discuss the vital ongoing work of restoration and conservation. A reference section includes maps, plans, and a checklist of tombs.

The ‘book experience’ is actually superior to the empirical one, especially when objects and monuments are presented – as they are in these photos – with flawless lighting and minutely focused amazing details.

Spectacular…. Highly recommended for anyone, general or specialist, with an interest in ancient Egypt.

Exquisitely detailed color photographs of mural and wall carvings record the religious and social scene in Egypt thirty-six centuries ago, as experienced not by pharaohs, but by lesser court figures, viziers, generals, architects, and priests.

A clear and scholarly narrative of the tombs of the officials or nobles of the Pharaohs in the New Kingdom period… The acclaimed Italian photographer, Sandro Vannini, provides the magnificent large format images in this beautiful book.