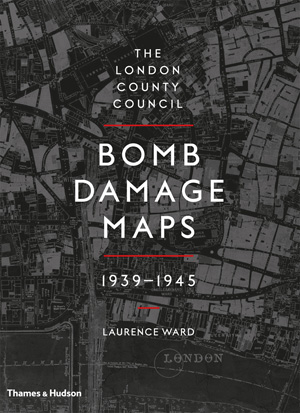 The aerial bombardment of London during the Second World War is one of the most significant events in the city’s modern history. Between 1939 and 1945, London and its environs experienced destruction on a huge and deadly scale, with air raids and rocket attacks reducing entire buildings and streets to rubble. The London County Council Bomb Damage Maps—meticulously hand-colored to document the extent of the damage being wrought on the city and surrounding areas—represent a key record of the destruction wrought by the Blitz, the impact of which can still be seen in the capital’s urban and social landscapes.

Featuring new, high-quality reproductions of the 110 maps, this publication marks the first occasion on which these truly remarkable documents have been made available to a general audience. An introduction by Laurence Ward, Principal Archivist at the London Metropolitan Archives, explores the maps in the context of the terrible events that made them necessary. Reproductions of the maps themselves are complemented by a series of photographs of the damage done to the City of London, taken with a sympathetic yet unflinching eye by police constables Arthur Cross and Fred Tibbs; additional archival photographs; and tables of statistics. This landmark publication represents an invaluable graphic representation of one of the most dramatic and affecting episodes in the history of London.

The scale of the maps (1:2,500) is enough to picture individual buildings, allowing the collection overall to create a fastidious portrait of sustained carnage… documenting destruction and heartbreak that is hard to fathom. This unusual and high-quality contribution to World War II collections will be welcomed in all libraries.

Laurence Ward is curator at the London Metropolitan Archives.