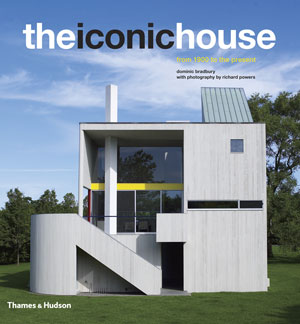 An essential book on modern architecture: one hundred of the most significant houses of the past hundred years.

From the first stirrings of modernity in the early twentieth century to the present, the house has served as a test bed of design experimentation, the place where architects have sought to create new forms and to offer new domestic lifestyles. Alvar Aalto, Buckminster Fuller, Rudolph Schindler, Frank Lloyd Wright, Frank Gehry, Eileen Gray, Charles and Ray Eames, Charles Gwathmey, Carlo Scarpa, Herzog & de Meuron: most great architects of the past hundred years have begun or catalyzed their careers with an iconic house.

The introduction looks at the historical and social motivations behind epoch-making residential architecture, showing in sidebars twenty of the most important early examples. Then eighty houses—sixty of which have been specially photographed—are presented chronologically. The text describes the all-important relationship between architecture and client, the physical context in which the house is set, and the pivotal role the house played in the development of the architect’s career and architecture in general.

Concise architect biographies and a list of key buildings accompany each house, while photographs and easy-to-read plans bring the words to life.

A stunning array of the past century's architectural masterpieces…. Tells the intimate stories of these remarkable buildings and their architects and clients. Informative texts, specially commissioned photographs, and a wealth of floor plans and drawings offer detailed documentation

An insightful tour of 100 remarkably innovative houses designed during the past century by architects including Frank Lloyd Wright, Frank Gehry and Rem Koolhaas.

A chronological survey of 100 cutting-edge dwellings by great architects, including Le Corbusier, Frank Lloyd Wright, and Rem Koolhaas, illuminating each with photographs, floor plans, and a biography of its creator.

Dominic Bradbury is a journalist and writer specializing in architecture and design. He writes for many magazines and newspapers in the UK and internationally, including Wallpaper*, World of Interiors, House & Garden, Vogue Living, The Telegraph, The Times, and the Financial Times. His many books include Mid-Century Modern Complete, The Iconic Interior, Mountain Modern, Waterside Modern, and most recently, Off the Grid: Houses for Escape.

Richard Powers is a photographer specializing in interiors, architecture, and the built environment. His books include The Iconic Interior, Beyond Bawa, and New Paris Style.