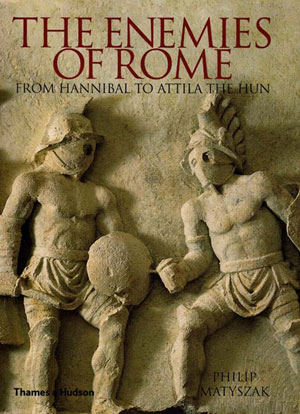 Until recently, it was assumed that Rome carried the torch of civilization into the barbarian darkness, bringing law, architecture, and literature to conquered peoples. The alternative view now suggests that many of Rome’s enemiesthe Celts, Hebrews, and Phoenicians, for examplewere developing civilizations in their own right before obliteration at the Roman sword. Indeed, as Philip Matyszak argues, had Rome not crushed rivals so completely, the drop into the Dark Ages might not have occurred; at Rome’s collapse, no other powerful civilizations remained to absorb the impact. This book looks at the growth and eventual demise of Rome from the viewpoint of those vanquished by Rome. They varied from the highly cultivated Greeks and Egyptians to wild and rebellious Britons and Germans, to the Asiatic empires of the Persians and Parthians. Their leaders were driven by ambition, vindictive hatred, fear, political calculation, or naked greed. Some fought to preserve their heritage, some for personal survival, and others from a warrior’s love of battle. Defying the might of Rome was a dangerous business, and few of the men and women described here died in their beds. Some, like Vercingetorix and Jugurtha, were captured, exhibited in triumph, and then, while their conquerors sat down to a festive dinner, killed in the dungeons below. Rather than face such an end, some of Rome’s greatest adversaries, including Hannibal, Boudicca, and Cleopatra, killed themselves. Here is the reality behind legends such as Spartacus the gladiator, and the stories of Shapur the conqueror and Mithridates the connoisseur of poisons. Some enemies of Rome were noble heroes, others were murdering villains, but each has a unique and fascinating story. 80 illustrations.