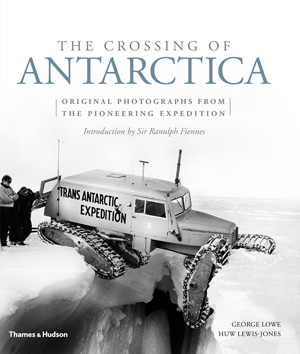 The year 2014 is the centenary of Sir Ernest Shackleton’s Endurance expedition, which aimed to complete the first crossing of Antarctica. He did not succeed, and his great vision rapidly turned into a now-legendary struggle for survival. Shackleton’s lifelong dream—to cross the continent—was at last realized by Sir Vivian Fuchs and Sir Edmund Hillary in 1957-58. As a key member of this Commonwealth Trans-Antarctic Expedition, Everest veteran George Lowe was there to capture it all on film.

In this remarkable book, a trove of unpublished photographs and other rare materials from the Lowe collection are brought together for the first time. Awe-inspiring landscapes, candid portraits, and action shots evoke the everyday moments of this historic expedition as never before.

A photographic monograph that shows in dramatic detail just how different this journey was…Lowe's narrative, combined with essays by Huw Lewis-Jones, form an entertaining account …and leave the reader wondering why it ever had slipped into the backwaters of history.

Lowe's photographs offer a humanizing look at the since-deified explorers, depicting their beards of ice and feasts of tinned vegetables for Christmas dinner. It also gives readers a visceral sense just how raw and brutal the conditions were.

A captivating chronicle of the first successful crossing of the Antarctic continent, this [is a] remarkable visual and personal testimony of a polar expedition that rewrote the history books, and an epic journey of endurance and fellowship in the wildest of places.

A well-written narrative of the trek…Recommended.

Excellent…Will be of interest to anyone who enjoys venturing into wilderness terrain or travelling to spellbinding locations that are rarely frequented by less-adventurous souls.

George Lowe was a New Zealand born explorer, mountaineer, photographer and filmmaker. His stunning photographs of the first ascent of Everest were published in 2013 by Thames & Hudson in The Conquest of Everest.