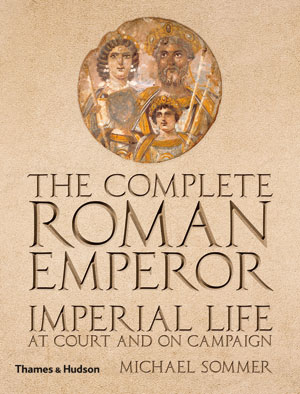 The eighty-five emperors who ruled Rome for five centuries are among the most famous and notorious leaders in history. But what do we really know about how they ran the empire and their behind-the-scenes machinations? How did they manage relations with their wives, courtiers, and officials? How indeed did they rise to the purple in the first place?

Organized thematically, this intriguing and enlightening book covers everything from the establishment of the role of emperor by Augustus to imperial building projects in Rome and Constantinople and the emperors on campaign. A day in the life of an emperor reveals that Vespasian started work before dawn, while Constantine read the Bible. Morning audiences hearing petitioners’ pleas and lawsuits were followed perhaps by a modest lunch of bread, fish, cheese, and figs (Augustus), an afternoon spent on correspondence or with concubines (Vespasian), or a lavish evening dinner (Nero showered his guests with flowers and perfume).

Hardy emperors such as Trajan, who imagined himself as a new Alexander, or Septimius Severus, who marched huge distances on foot with the legions, are contrasted with dissolute rulers such as Nero, who was said never to travel without a retinue of one hundred coaches. Above all, the book charts the immense changes over time, from the original “emperor as first among equals” to the soldier emperors of the third century, the aloof superhuman figures of Constantine’s era, and the weak, passive rulers of Rome’s decline and fall.