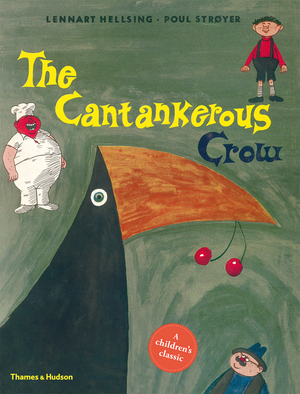 This is the story of a spunky, wayward little crow who comes from a family of crazy crows that includes a sister who tries to write and another who builds castles.

The Cantankerous Crow’s adventures began one day when a farmer caught him eating cherries from one of his trees. The farmer put him to work, but the crow kept doing things his own way. So he chopped up a flagpole for kindling, poured water on the cat’s head, and went on a wild wagon ride with the farmer’s son that almost ended in disaster. He didn’t do much better by a baker who tried him out as an apprentice, but he did manage to have a grand time with all his mistakes. Nevertheless, he was glad to fly back to his family, who welcomed him in their own special way.

This lively, brightly illustrated classic children’s book, originally published in 1953, is available again to bring this whimsical story to a new generation of readers.

The Cantankerous Crow is an old legend brought back to caw-cawing life…. The rhyming prose is as fast-paced as it is playful, and the illustrations by award-winning Danish illustrator Poul Stroyer, offer a rich, colorful, and kid-friendly view of the crow's chaotic world.

Lennart Hellsing was a Swedish writer and translator.

Poul Strøyer was a Danish cartoonist, illustrator, and artist.