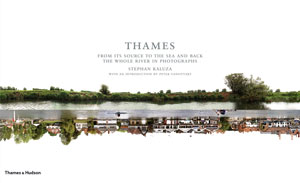 In the spring of 2006 the artist Stephan Kaluza and his team photographed both banks of the Thames from its source in the Cotswold Hills to its mouth in the North Sea. They went partly on foot and partly by boat and took pictures of each bank every few seconds, ending up with about 30,000 images. A selection of these was then digitally combined to form the consecutive sequences of the changing and varied riverscapes that are displayed in this book.

Although the Thames and the city of London seem an inseparable entity, the river has a rich natural and historical identity of its own, revealed by this journey along it. The Thames flows through remote rural limestone villages and farms and the medieval city of Oxford, past boathouses and hundreds of small craft at their moorings, past the ends of the gardens of Henley and Marlow and through sprawling Reading. It runs through Windsor Great Park and past Hampton Court before it reaches the Houses of Parliament and the City of London. As it broadens, the Thames passes the new towers of Canary Wharf and the remaining docklands where large ships still unload their cargoes, flowing into the Thames Estuary and the North Sea.

Stephan Kaluza studied painting and philosophy at the Heinrich-Heine University in Düsseldorf. He has exhibited widely in Europe, the Far East, and America. Peter Vansittart, the distinguished novelist and historian, has written a short introduction covering the river’s history.

Brings us to faraway places…. Gives a duck’s-eye view of the nation.

A monumental undertaking…. The perspective, proportions, distance to the shore, and even the seasons, ebb and flow fluidly, mixing single moments from four months of work into a continuous visual experience.

Stephan Kaluza studied painting and philosophy at the Heinrich-Heine University in Dusseldorf. He has exhibited widely in Europe, the Far East, and America. He lives in Germany.

Peter Vansittart, the distinguished novelist and historian, has written a short introduction covering the river’s history. He lives in England.