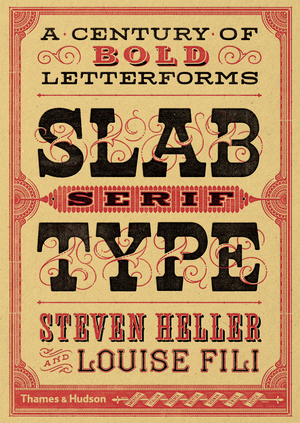 The slab serif typeface—in their classic form, wood types made for large-scale posters, ads, and newspapers—may not be as all-purpose as the gothic or sans serif, but it is equal, if not more powerful, in graphic appeal. Since being introduced in the nineteenth century, slabs have become ubiquitous and are today as popular as ever.

Slabs come from a genre of Egyptian typefaces (some of the leading slabs are called Cairo and Sphinx) brought back to France by Napoleon and marketed in specimen sheets and books as representing a glorious heritage brought to the present. In 1931, Morris Fuller Benton created the Stymie typeface, a reworking of a slab serif type popular in Europe at that time: Memphis. The IBM logo is one of the most famous slab serif marks. The serifs were often exaggerated so they would not result in simply beautiful letterforms but would be functionally superior to other faces. Slabs, therefore, came in many iterations and were eventually recognized as a face with many characters—and nationalities.

Steven Heller is co-chair of the MFA Design: Designer as Author program at the School of Visual Arts, New York. His many previous books include
Typographic Universe, New Modernist Type, and Scripts.

Louise Fili is director of Fili Design, a New York-based design studio specializing in typographic treatments. The recipient of the AIGA Medal in 2014, she is the coauthor with Steven Heller of Scripts.