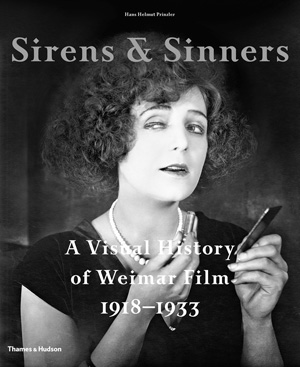 Between the First and Second World Wars, Germany under the Weimar Republic was the scene of one of the most creative periods in film history. Through the silent era to the early years of sound, the visual flair and technical innovation of its filmmakers set an international standard for the powerful possibilities of cinema as an art form, with movies such as The Cabinet of Dr. Caligari, Nosferatu, Metropolis, and M building a legacy that shaped the world of film.

Here is a showcase of more than seventy films, selected to give a wide-ranging overview of Weimar cinema at its finest. Every genre is represented, from escapist comedies and musicals to gritty depictions of contemporary city life, from period dramas to fantastical visions of the future, with themes such as sexuality and social issues tackled by iconic stars like Marlene Dietrich and Louise Brooks. A wealth of film stills captures the bold vision of great directors like Fritz Lang and Ernst Lubitsch, while the text sets the historical scene and gives intriguing insights into what the films meant to the society that created them.

This chapter in movie history was brought to a close by Hitler’s rise to power in 1933. Directors, screenwriters and actors found themselves obliged to leave Germany, and brought their talents to Hollywood.

Germany’s Weimar period is endlessly fascinating, and this book explores one of the many art forms that blossomed in that time and place.

The images are a pleasure to behold and present the reader with a representative cross-section of the period’s major films and aesthetic styles…Recommended.

Smolders as it captures the visual influence of Weimar film and its stars. Highly recommended.

Hans Helmut Prinzler, a former director of the Deutsche Kinemathek in Berlin, has written widely on the topic of German cinema. He lives in Berlin.