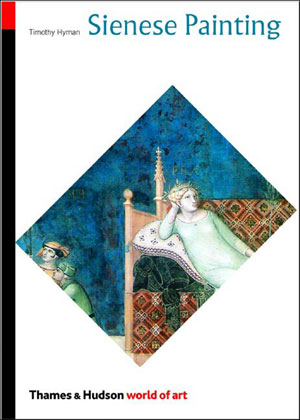 A practicing artist, author, and curator, Timothy Hyman guides us through the golden age of Sienese painting, offering a new perspective on some of the world’s most beautiful paintings, including Duccio’s Maesta and Ambrogio Lorenzetti’s famous Good Government frescoes. A sound understanding of the art and history of the period underpins the author’s clearly conveyed love of the works. He takes a broadly chronological approach, with each chapter looking at one particular artist or group of artists from the late thirteenth century to the late fifteenth. Perceptive visual analysis is combined with clear discussion of the social, political, and religious climate of late medieval Italy. The impact of the Black Death on Siena’s population and artistic production is discussed along with the profound effect of the Franciscan movement and the cults of local saints such as St. Catherine. Important throughout is Siena’s civic self-consciousness, felt in the many cityscapes of Sienese art, from the fortified towns of Simone Martini’s Guidorricio da Fogliano to the tiny schematic villages of Giovanni di Paolo’s St. John the Baptist cycle. Hyman’s enthusiastic tour of Sienese painting looks at its defining characteristicsrich color and spatial inventivenessand challenges the view that favors Florentine over Sienese art. An epilogue concludes with a look at the continuing renewed interest in Sienese painting and a discussion of its impact on contemporary artists such as R. B. Kitaj. Anyone interested in the art and culture of Italy, including those already familiar with Sienese painting, will find inspiration in this book. 180 illustrations, 80 in color.

Timothy Hyman is an art critic and historian, as well as a painter. His articles have appeared in the London Magazine and TLS.