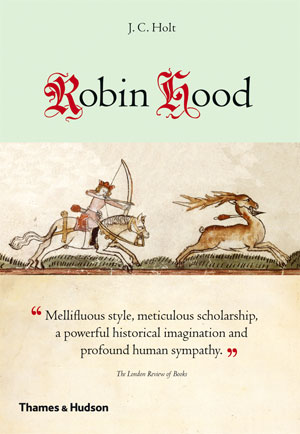 The legend of Robin Hood began more than 600 years ago. The man, if he existed at all, lived even earlier. In this definitive work, Professor Sir James Holt, one of Britain’s premier historians and author of the standard work on the Magna Carta, unravels pure invention from real possibility and offers the results of some thirty years of research.

He assesses the evidence for the historical Robin Hood and finds that the tale originated with the yeomen and hangers-on of the households of noblemen and gentry in the later Middle Ages. Parts of the story that we now take for granted—Maid Marian, Friar Tuck, Robin as robber of the rich and giver to the poor, even Sherwood Forest—played little or no part in the original tales, and were added as the centuries passed and the legends grew.

The legend of Robin Hood has enthralled people from the first ballads to contemporary movies. Holt reconstructs the historical basis of the stories but never loses sight of the human imagination that sustained them. This edition includes new illustrations and The Gest of Robyn Hood, one of the oldest surviving tales.

Holt’s work is solid and interesting, likely to last.

An admirable work of historical detection.

— A. L. Rowse, author of The Elizabethan Renaissance

J. C. Holt was Master of Fitzwilliam College and Professor of Medieval History at the University of Cambridge.