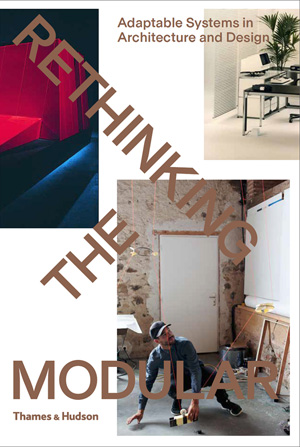 In 1965, leading Swiss furniture company USM patented its signature modular furniture system, USM Haller. This flexible storage solution for both home and office was inspired by Fritz Haller’s modular architecture and designed for infinite reuse and reconfiguration. Considered a design classic, USM Haller is included in the collections of major museums including MoMA and the Cooper-Hewitt National Design Museum.

Released as part of USM’s fiftieth-anniversary celebration of this iconic furniture design, Rethink the Modular examines the role of unit-based systems in the wider context of architecture and design. It combines previously published writings, specially commissioned essays from thinkers and innovators John Thackara and Rick Poyner, and interviews with leading figures in the design world that explain how the concept of the modular influences their work. Interspersed with visual material, the texts reveal the many possibilities created by balancing structure with flexibility, and seek to redefine the place of modularity in modern design history.

Burkhard Meltzer is a freelance curator who writes for magazines such as Kunstbulletin, Frieze,and Spike. He was curator and art director at the Neue Kunsthalle St. Gallen.

Tido von Oppeln is an author and curator. He has worked on various exhibitions about design, art, and architecture at the Museum der Dinge, Vitra Design Museum, Marta Herford, and the Museums Quartier Vienna. He lives in Zurich. He is the editor, along with Burkhard Meltzer, of It’s Not a Garden Table.