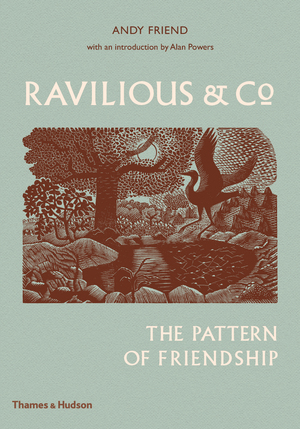 Eric Ravilious is one of the best-known twentieth-century English artists. For many, his watercolors capture the spirit of midcentury England. But while he had a style of his own, he did not work in isolation; he worked within a network of artists that included fellow students at the Royal College of Art such as Edward Bawden, Barnett Freedman, Enid Marx, Percy Horton, Peggy Angus, and Helen Binyon.

The story of this beloved artist is also a biography of the group of fellow creators with whom he associated—men and women who inspired, challenged, and influenced one another—from their student days up through the Second World War. Drawing on extensive research, Andy Friend considers the predecessors in the English watercolor and wood-engraving tradition that influenced the group’s art and demonstrates the significance of women artists, whose place within this interwar-era network has often been neglected.

Published to coincide with the seventy-fifth anniversary of Ravilious’s death, Ravilious & Co. accompanies an exhibition of the same name, touring throughout England in 2017.

This book follows the lives of talented British artists and designers of the 1920s and 1930s [who] met as classmates at London's Royal College of Art, [with] the focus on Eric Ravilious (1903-42), now known for his beautifully composed rural landscapes in watercolor. Friend has captured all aspects and successes of these dedicated artists. Numerous illustrations showcase a variety of the assured arc and design works pro­duced during the period. This book should inspire readers curious about 20th-century British art and design.

Andy Friend is a Ravilious expert and co-curator of Ravilious & Co. at Towner Art Gallery in Eastbourne, UK.

Andy Friend is a Ravilious expert and co-curator of Ravilious & Co. at Towner Art Gallery in Eastbourne, UK.

Alan Powers is Professor of Architecture and Cultural History at the University of Greenwich in London. An art historian, practicing artist, and author, he has written a number of books on Eric Ravilious.

Alan Powers is a widely published author on twentieth-century art and design. He teaches at the New York University in London, the London School of Architecture, and the University of Kent.