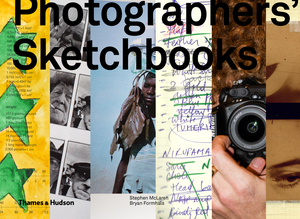 Find out how Alec Soth constructs his projects, why Trent Parke relies on old-fashioned Polaroids and hand-made books, and how forty-one other photographers experiment with new and old technologies, turn their photo-diaries into exhibitions, and attract audiences of millions via online platforms.

This book celebrates the creative processes of the modern photographic era, in which blogs and Instagram streams function alongside analog albums and contact sheets, and the traditional notebook takes the form of Polaroid studies, smartphone pictures, found photography, experimental image-making, and self-published photo-zines. Each photographer presents his or her sketchbook: several pages of images that convey his or her working methods and thought processes. These intimate, oneoff presentations are accompanied by engaging interviews that reveal how the simple act of pressing a shutter can capture and express a fully realized personal vision.

Three essays by the authors explore subjects at the cutting edge of contemporary practice. Designed to satisfy the most demanding of image junkies, this is an indispensable resource for anyone with an interest in photography or the creative process.

What's most interesting about Photographers' Sketchbooks is how it bridges the analogue and the digital, both of which have a firm place in photography today.

To many, it might seem that the art of photography is simply a matter of going out and snapping pictures. But there's a lot more to it, and there's ample proof in the scribbles, diagrams, and other materials found in Photographers' Sketchbooks.

Gathers together the notes, research, and exhaustive preparation that went into some of contemporary photography's most interesting projects. From Roger Ballen's fever dreams to Viviane Sassen's controversial Africa photography, it's all here.

Provides a behind-the-scenes look into the idea conception and through process of forty-nine photographers from around the globe.

Stephen McLaren is a photographer, writer, and curator based in San Francisco. He is coauthor, with Sophie Howarth, of Street Photography Now. He also coauthored Photographers’ Sketchbooks with Bryan Formhals.

Bryan Formhals is a New York based photographer and writer. He is founding editor of LPV Magazine.