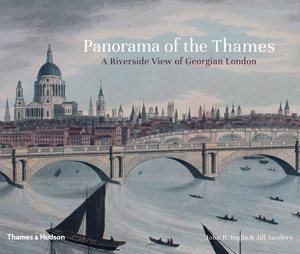 This delightful book reproduces much of bookseller Samuel Leigh’s rare, hand-colored, sixty-foot panorama of both banks of the River Thames between Westminster and Richmond, as well as his complete panorama of the City and Southbank as seen from the Old Adelphi buildings in the Strand. Together, they offer fascinating views of central London and the riverside villages in 1829, toward the end of the Georgian period. The journey takes us past all the waterside communities and villages of the day, each of which is introduced by a short history and with its stately homes, churches, and other structures clearly identified. An eight-page gatefold reproduces the view of the City of London form the Adelphi district. A gazetteer, also divided by village, provides additional information on the most interesting and important landmarks. This is a history of how one of the world’s great cities has been shaped by the river that runs through it.

John R. Inglis worked in the UK film industry for forty years as an editor, cinematographer, and director. He lives on an island in the Thames and is currently involved in the Panorama of the Thames project, a photographic record of all the landmarks along the Thames in London: www.panoramaofthethames.com.

Jill Sanders trained as a journalist and worked as a reporter as well as in the charitable and local government sectors in the field of communications and research. After twenty-five years living on an island in the Thames, Jill has developed an intense interest in the river’s landscape, history, and traditions, as well as its biodiversity, and is involved with local groups to conserve and enhance the river environment.