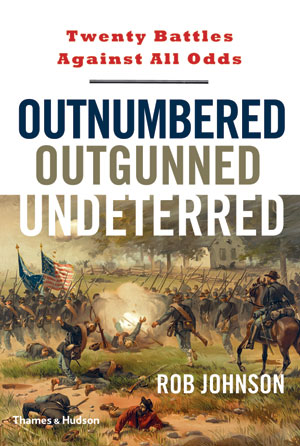 Throughout history men and women have fought, endured, and sometimes emerged victorious though the odds were against them. What conditions must exist to enable relatively small or weak forces to challenge and even overcome the strong? Here are twenty historical examples, from 1777 to the present, that reveal both the common themes and the exceptional aspects of those achievements.

The examples range from George Washington’s rebuilding of the patriot army in the Revolutionary War to the defense of the Philippines in 1941–42, from Si´mon Boli´var’s liberation of South America to Finland’s defiance of the Soviet Union in the Winter War of 1939. The courage of the Devonshire Regiment at Bois des Buttes in France in 1918 shows what skillful and determined resistance can achieve, though—as in the defense of Stalingrad in 1943—isolated forces were often left with no option but to fight. The resolve that accompanies a last-ditch effort is demonstrated in the Israeli Defense of the Golan Heights in 1973. Two more recent examples— the Battle of Debecka Pass in Iraq in 2003 and the battle of the Patrol Bases in Afghanistan, 2006–08—show that some themes from these extraordi-nary historic achievements are still played out in warfare today.

Johnson demonstrates a flair for explaining the plight of modern armies fighting insurgents and the difficulties of sustaining coalitions in protracted conflicts.

Rob Johnson…sucks the reader into a heart-pounding action of twenty battles fought by an outnumbered, outgunned yet wholly undeterred force of men (and the occasional woman) with intense, detailed prose.

Rob Johnson, a former officer in the British Army with operational experience, is Lecturer in the History of War at Oxford University. His previous books include Outnumbered, Outgunned, Undeterred, and (with Michael Whitby and John France) How to Win on the Battlefield.