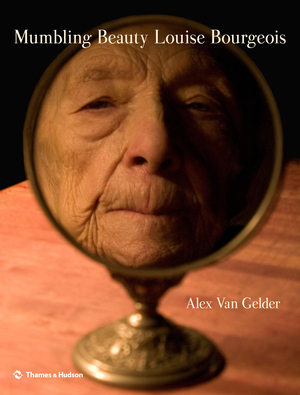 An intimate, powerful portrait of Louise Bourgeois in the final years of her life

From 2008 to 2010 Louise Bourgeois allowed Alex Van Gelder into her private world—her studio and home—and indulged his lens, while she worked, rested, waited—mischievous, or lost in thought, weary of decrepitude, raging, defiant to the end. She fills the camera with her presence. It is a profound portrait of an artist of the utmost consequence and a piercing study of extreme age.

Louise Bourgeois was one of the last surviving artists of the high modernist era, and her early work anticipated what would come in the late modern and postmodern eras, including minimalism, installation art, and body art. However, she did not achieve fame until after her seventieth year, discovered and heralded by a new generation. Once discovered, her reputation grew in the 1980s, ’90s, and 2000s with an array of major international exhibitions and a burst of creativity. Throughout, her art is confessional, psychological, and fraught with fear, anger, and sexuality.

Van Gelder’s collaborative portrait is in many ways a message from Bourgeois to the world, her chosen epitaph, scrawled in her own way by gesture, expression, and posture. Despite the frailty and decrepitude of her near one hundred years, she defies her vulnerability.

This collaboration serves as a primal and poignant extension of Bourgeois's art. Her theatrical spirit seems to defy the incredible frailty of her frame. These photographs are a record of one of our great modern artists, fading in body, still inventing with fervor while she can.

Alex Van Gelder lives and works in Paris. He has published many books including Life & Afterlife in Benin. He exhibited a portfolio of photographs of Louise Bourgeois’s hands in 2011. A catalogue entitled Alex Van Gelder—Louise Bourgeois ARMED FORCES accompanied the exhibition.

Hans Ulrich Obrist is an art historian and Director of International Projects at the Serpentine Gallery.