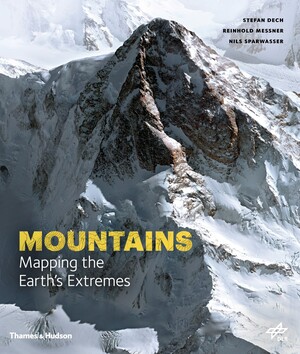 Mountains marks a new milestone in Earth observation and Alpine exploration. For the first time, a special recording process and a technique developed at the German Aerospace Center (DLR) allow the satellite recording of three-dimensional views from 300 miles above with a resolution in the range of a few meters. Photorealistic images are created in this manner from perspectives denied even to mountaineers and helicopter pilots.

In addition to highly accurate detailed models of individual regions, the DLR generates a global three-dimensional elevation model of Earth in unprecedented quality. For this purpose, two German satellites are currently circling the earth at a speed of more than 15,000 miles per hour—separated by a mere 500 feet. Taken together, both techniques offer a detailed view of a world that still pushes human beings to their limits—the mountainous regions of our planet. For this book Reinhold Messner has selected thirteen peaks and routes to feature, as they’ve never been seen before.

Stefan Dech is director of the German Remote Sensing Data Center at DLR’s Earth Observation Center. Since 2001 he has been holding the Chair for Remote Sensing at the Institute of Geography, University of Wuerzburg. He obtained his doctorate in geography from Wuerzburg University in 1997. He is author of about 200 scientific publications and co-author of the high quality books Planet Earth, Mountains from Space and Global Change.

Reinhold Messner, born in South Tyrol in 1944, performed many first ascents, scaled all 14 eight-thousanders, and crossed Greenland and Antarctica on foot. His books have been translated all over the world.

German Aerospace Center (DLR), is a space agency in charge of the German space program on behalf of the federal government. It conducts research and development in aeronautics, space, energy, transport, and security.