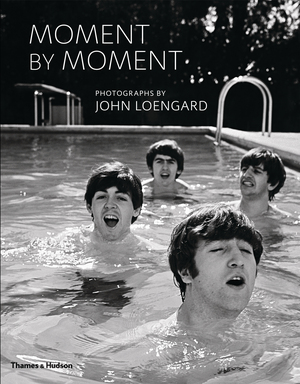 As John Loengard writes in the preface to this monograph, “The truth is: a good photograph cannot be repeated. This may be why a photograph of a brief moment, an instant in time, can hold our interest forever.” Moment by Moment is an intriguing selection of many moments in John Loengard’s long career. His subjects include movie stars, writers, politicians, artists, and other photographers, as well as normal people engaged in a host of extraordinary activities—or, rather, typical activities rendered unforgettable or of enduring interest by the photographer’s vision. From a shimmering Marilyn Monroe to a brooding T. S. Eliot, from a now almost sinister silhouette of Bill Cosby to an iconic shot of the Beatles, from an Etonian to a boy in the streets of Manchester, as well as ranchers, sweepers, picnickers, and fellow photographers, Loengard’s vision moves and delights us with his humanity and artistry.

Moment by Moment enlarges our understanding and deepens our appreciation of Loengard’s photographs.

The earliest picture in John Loengard's Moment by Moment was taken in 1953 when he was a Harvard undergraduate; an attractive young woman in an overcoat and scarf leads students through a snow-covered Harvard Yard to class. Mr. Loengard already knew how 'to let the camera marry reality to form' (his prescription for a successful picture), and a few years later became a LIFE staff photographer.

It's fair to say photographer John Loengard is a LIFE magazine legend. The impressive collection of portraits includes Judy Garland at Carnegie Hall in the 1960s, Queen Elizabeth in Ethiopia, and Louis Armstrong sipping beer at a Queens barbershop…Mariah Carey lounging at a friend's apartment in the 1990s, Maya Angelou, weeks before she read a poem at Bill Clinton's inauguration, and Annie Leibovitz atop the Chrysler Building.

Loengard's…subjects, whether famous or unknown, are treated with the same careful, thoughtful eye.

Loengard counted everyone from monarchs to pop stars among his subjects. Vanity Fair once called him 'an oracle,' but he shrugs off such praise. 'Taking a photograph,' he says, 'is as simple as boiling an egg.'

'A great photographer has the knack of putting a great picture in front of his camera,' (Loengard once said). It's a mantra that's visible in this collection.

The book is beautifully done…The design is excellent and complements the immediacy and strong presence of the photographs.

Loengard has a trained eye for the decisive moment. With material ranging from celebrities to marginalized citizens to his own family members, he takes a sweeping sojourn down memory lane, with striking juxtapositions.

John Loengard is an American Photographer. He was the picture editor at Life magazine from 1973 to 1987. His work is included in the collections of the national Portrait Gallery in Washington, DC, the International Center of Photography in New York, and many others.