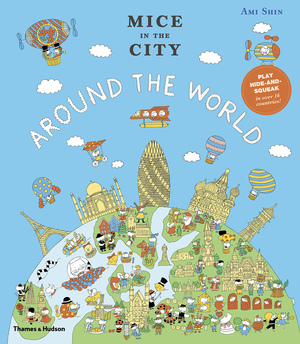 Follow two intrepid mice, Stanley and Mrs. Crombie, on their airship adventure around the world! This hide-and-seek book will charm young children and reveal something new each time they look at the illustrations.

Stanley almost doesn’t make it past his first destination thanks to overindulging on delicious cheeses in Paris; he loses his hat in a breeze above the Great Wall of China; in Moscow, Stanley, and Mrs. Crombie discover they have a secret stowaway in the form of a fat black-and-white cat; and quite unintentionally, Stanley causes a stampede of elephants in Delhi. These and many more adventures await in this global addition to the Mice in the City series, which celebrates the culture of each destination through foods, festivals, and dress. The illustrations teem with surprises and the book invites children to play “hide-and-squeak,” searching each page for familiar characters.

Jamie Harris is a writer and photographer based in the UK.