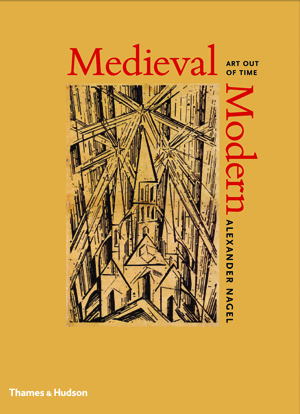 This groundbreaking study offers a radical new reading of art since the Middle Ages. Moving across the familiar period lines set out in conventional histories, Alexander Nagel explores the deep connections between modern and premodern art to reveal the underlying patterns and ideas traversing centuries of artistic practice.

In a series of episodic chapters, he reconsiders from an innovative double perspective a number of key issues in the history of art, from iconoclasm and idolatry to installation and the museum as institution. He shows how the central tenets of modernism – serial production, site-specificity, collage, the readymade, and the questioning of the nature of art and authorship – were all features of earlier times before modernity, revived by recent generations.

Nagel examines, among other things, the importance of medieval cathedrals to the 1920s Bauhaus movement, the parallels between Renaissance altarpieces and modern preoccupations with surface and structure; the relevance of Byzantine models to Minimalist artists; the affinities between ancient holy sites and early earthworks; and the similarities between the sacred relic and the modern readymade. Alongside the work of leading 20th-century medievalist writes such as Walter Benjamin, Marshall McLuhan, Leo Steinberg, and Duchamp, Kurt Schwitters, Robert Smithson, and Damien Hirst.

The effect of these encounters goes in two directions at once: each age offers new insights into the other, deepening our understanding of both past and present, and providing a new set of reference points that reframe the history of art itself.

Alexander Nagel, one of the luminaries of Renaissance art history …set[s] out to provide a theoretical framework …to link the old and the new.

Nagel argues the fascinating thesis that medieval and modern art should be considered in concert to better understand the latter. This lengthy scholarly work discusses structural analogies between medieval and modern art, for example, discussing both eras' emphasis on the placement of art in specific real-world sites, as well as on surfaces and the art object itself…Provides a readable argument and offers wide-ranging examples.

Nagel boldly forges and uncovers intellectual and formal relationships between …art objects and practices from the medieval and modern eras.

— The Marginalia Review of Books

Alexander Nagel is Professor Fine Arts at the Institute of Fine Arts, New York University. He lectures and writes widely on Renaissance and modern art, both for academic journals and art magazines such as Cabinet, ARTNews and Artforum. His books include Michelangelo and the Reform of Art winner of the 2002 Gordan Prize for Renaissance Studies, Anachronic Renaissance (co-authored with Christopher Wood) and The Controversy of Renaissance Art, winner of the Charles Rufus Morey Book Award.