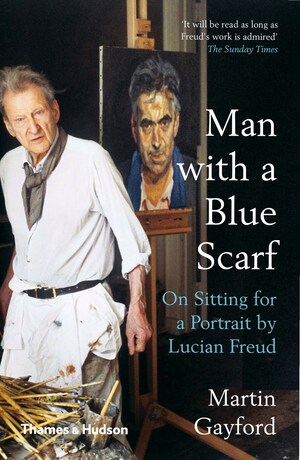 Lucian Freud (1922–2011), widely regarded as the greatest figurative painter of his time, spent seven months painting a portrait of the art critic Martin Gayford. The daily narrative of their encounters takes the reader into that most private place, the artist’s studio, and to the heart of the working methods of this modern master—both technical and subtly psychological. From Man with a Blue Scarf emerges an understanding of what a portrait is, but something else is also created: a portrait, in words, of Freud himself. This is not a biography, but a series of close-ups: the artist at work and in conversation in restaurants, taxis, and his studio. It takes one into the company of the painter who was a friend and contemporary of Pablo Picasso, Alberto Giacometti, and Francis Bacon, as well as writers such as George Orwell and W. H. Auden.

Now for the first time as a compact paperback, this book is illustrated with works by Lucian Freud, telling photographs of Freud in his studio, and images by great artists of the past, such as Vincent van Gogh and Titian, who are discussed by Freud and Gayford.

Full of wry observations, the book reveals how it feels to pose for a remarkable artist and become a work of art.