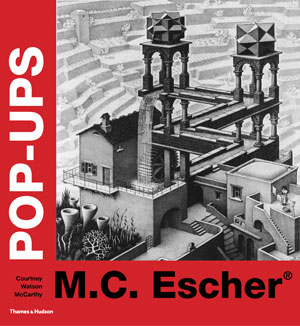 The mesmerizing work of Dutch graphic artist M. C. Escher has fascinated viewers for more than seventy years. His illustrations constantly play with our perceptions of reality by layering multiple conflicting perspectives.

Produced in association with the Escher estate, this book presents some of the artist’s most intriguing works in original three-dimensional pop-ups. These marvelous paper constructions allow us to appreciate in new ways the artist’s impossible geometry and his themes of infinity and paradox.

The book also features quotes from Escher on the original pieces of art as well as reproductions of a number of his other works.

…an outstanding collection for pop-up art collectors in general and fans of M.C. Escher's geometric creations in particular.

— The Midwest Review of Books

This book presents some of [Escher's] most boggling work in a whole extra dimension.

Martin Howard is the author of more than fifty books. He has published works on numerous historical figures, as well as producing biographies of Alexander the Great and Christopher Columbus for children.