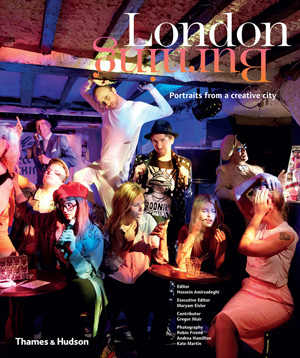 Tracing the city’s sparking of change across architecture, cinema, theatre, literature, dance, fashion, media, music, technology, design, and the visual and culinary arts, London Burning also explores the dynamics that have always underpinned the city’s creative scene and the forces behind the city’s unique drive.

London Burning brings this powerful creative center to life through the eyes of its most influential and innovative denizens.

The 100 finely crafted interviews and profiles here focus not only on traditional categories of visual and performing artists, but reach further to tap into less obvious wellsprings of an urban creative scene. London Burning provides an endlessly energizing experience… A living, sizzling sketchbook.

The book - which has been expertly edited by Hossein Amirsadeghi and features an essay by Gregor Muir, director of London's ICA - also gives insights on the tribal dynamics and unique drive that underpin the city's creative landscape.

Maryam Eisler holds a BA from Wellesley College (where she is a trustee) and an MBA from Columbia University. She has had executive editorial roles on publications including Unleashed: Contemporary Art from Turkey, Art and Patronage: The Middle East, Sanctuary: Britain’s Artists and their Studios, and Art Studio America: Contemporary Artist Spaces. Eisler is a member of the Tate International Council, a trustee of the Whitechapel Gallery and co-chair of Tate’s MENAAC acquisitions committee.