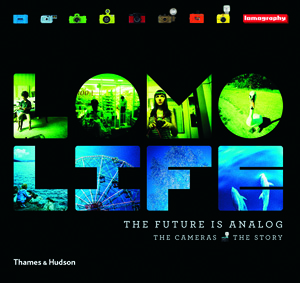 Lomography is a worldwide photographic phenomenon: a film-based camera company with over 150 modestly priced models, and an expanding global community of enthusiasts devoted to its ingenious range of film cameras and the brand’s experimental and inclusive ethos.

Lomography began when two students in Vienna stumbled on a small Russian camera called the Lomo Kompakt Automat (LC-A). Its trademark vignette shadowing, light leaks, and saturated colors were like nothing they had seen before. Setting themselves up as distributors, they soon attracted a cult following, and the Lomography community rapidly expanded into a worldwide phenomenon.

This two-volume survey is an essential resource for designers and photographers. The specially commissioned photography in Book I shows all the cameras in the vast Lomography range, past and present, including every limited edition. It also presents collaborations with a host of international stars including Paul Smith, Robert Ryan, Mike Perry, and Jack and Meg White. Book II presents the last twenty years of Lomography, detailing the evolution of the concept. Chronologically organized and featuring the best photographic material from the million-plus Lomography community, this volume offers snapshots from every corner of the world.

The text is wonderfully informative and the images burst with Lomo’s trademark freedom, fun, and chance…The collection showcases photos as highly colorful conversations: spontaneous and prolific.

Lomography is a film-based camera company. The head office is in Vienna.