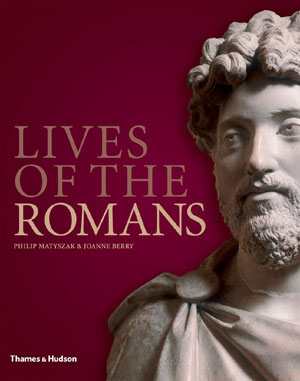 At its peak Rome’s empire stretched across Europe, Africa, and the Middle East, yet it started as a primitive encampment above a riverside marsh. This book spans the great chronological and geographical sweep of the Roman age and brings the reader face to face with those who helped create the empire, from consuls and commanders to ordinary soldiers, voters, and taxpayers.

An extraordinary range of viewpoints is explored in these biographies. A centurion and a plasterer’s wife share pages with the orator Cicero and the scholar Pliny the Elder, while a vestal virgin shares a chapter with Antinous, the boy-lover of Hadrian. Augustine, the church patriarch, and Constantine, Rome’s first “Christian” emperor, rub shoulders with Julian the Apostate and Vettius Agorius Praetextatus, leader of the pagans.

Roman women were the most liberated in the ancient world. They could wield massive power and influence, yet are often overlooked. Meet Servilia, Caesar’s lover; Sulpicia, the teenage poet; Amazonia, the sword-swinging gladiator; and Cloelia, the girl who escaped captivity by swimming the Tiber.

Lavishly illustrated with magnificent works of art, including portraits, sculptures, and Renaissance paintings of Roman scenes, this book reveals the real-life stories behind the rise and fall of Rome.

Philip Matyszak teaches Roman History for the Institute of Continuing Education at Cambridge. He has written extensively on the ancient world. Joanne Berry teaches ancient history at Swansea University and is the author of The Complete Pompeii.

Invites perusing with its beautiful illustrations…Recommended.

Joanne Berry teaches ancient history and archaeology at Swansea University. She is the author of The Complete Pompeii and co-author of The Lives of the Romans, both published by Thames & Hudson.