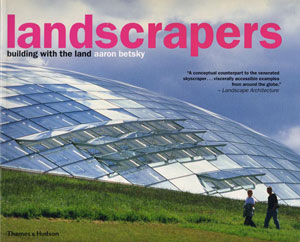 “An introductory historical survey on the many and creative ways humans have fought for and against the earth beneath our feet reveals an architecture that reads the text and texture of the land in three dimensions.” Architecture

Developments in structural engineering have made it possible to engage the earth’s surface as a building element. With an increased awareness of the planet’s limited natural resources and with landscape architects exerting ever-greater influence on contemporary design, architects around the world are building into the earth, merging man-made forms with the contours of the land.

The results are at once preternatural and breathtaking. From Zaha Hadid’s Tram Terminal in France to Antoine Predock’s Spencer Theater in the United States, over fifty projects expose the breadth and depth of this new direction in architecture.

Aaron Betsky first considers our historical preoccupation with communing with the land through building. He then explores the ways in which geotecture responds to, becomes a part of, and yet remains distinctive within our natural landscape. With the subtext of our planet’s power and beauty, Landscrapers reveals some of the most important, influential, and appealing building forms for today and the future. 367 illustrations, 290 in color.

Aaron Betsky is dean of the Frank Lloyd Wright School of Architecture and a former director of the Cincinnati Art Museum. He has authored numerous monographs on the work of late twentieth-century architects, including The Complete Zaha Hadid.