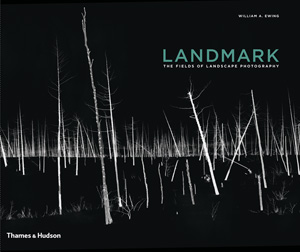 Landscape photography has traveled far from its origins in the picturesque or pastoral. It is at the cutting edge of contemporary image-making with leading photographers creating work that transcends definitions of “art” or “documentary.” This is the first truly international survey of a vibrant, burgeoning field of photography, its masterful image-makers, and their work.

William A. Ewing has selected more than 230 photographs by over 100 photographers, ranging from renowned figures such as Susan Derges, Edward Burtynsky, and Simon Norfolk, to younger rising stars including Pieter Hugo, Olaf Otto Becker, and Penelope Umbrico. Each of them represents an individual viewpoint of a shared concern for our changing landscape and environment.

Organized into ten themes—Sublime; Pastoral; Artefacts; Rupture; Playground; Scar; Control; Enigma; Hallucination; and Reverie—Landmark is an intelligent and poetic survey which captures a genre of photography to perfection.

Nothing in the universe is alien to landscape photography, the book argues, from Philippe Chancel's view of the construction of the Burj Khalifa in Dubai…to Elger Esser's hazy scene on the Sacramento River. The subject, however, is the present, and the present is mostly alarming…The book delivers a pair of oddly coupled messages: The planet is in deep trouble, and its trauma makes for eye candy.

An intriguing and much-needed survey of current work in landscape photography. Art photographers and painters alike will admire the compositions and interpretations of subject matter.

Important…a compelling and at times provocative meditation on the physical world around us.

Ewing's selections show art's power not only to observe and document nature, but also to imagine its future.

Every shade of optimism, awe, surprise and dread is represented in this colossal survey of contemporary landscape photography.

Expertly culled by photography writer and curator William A. Ewing, the variety of work encompassed in this volume sparkles…And, while it effectively demonstrates humankind's negative effects on the planet at a time when it is imperative to change our behavior, it does so without making it a rallying cry. With the recent defacement of some of the USA's national parks, it also shows us luminous visions of what it might have looked like before we went and messed it all up.

Presents a collection of images that departs from the work of the Ansel Adamses of the world…Flipping through the pages of Landmark instantly reveals beautiful places intertwined with humanity’s achievements—and global toll.

Even if you’re familiar with the more prominent names like Hiroshi Sugimoto and his grey, liminal water views, or Edward Burtynsky’s shocking industrial captures, it’s really Ewing’s curation that is most on view.

Works to explore the relationship between people and place—and that relationship, at times, is unsettling…Transports the reader from the sublime Ilulissat Icefjord in Greenland, photographed by Olaf Otto Becker—noting that Edmund Burke, in the 18th century, imbued the word 'sublime' with a sense of terror—to a hallucinatory image by Amy Stein of a coyote howling at a streetlight in Matamoras, PA.

Ewing’s latest book, Landmark, takes on the increasingly fraught field of landscape photography (he as tempted to call it Landslide) with his usual shrewd thoroughness…Ewing can’t avoid hitting the inevitable high notes here (Gursky, Sugimoto, Struth, Vitali), but his interests take him well beyond the obvious.

It's these unsettling photographs that hold the most power—they're not just reminders of the Earth's beauty, but of its fragility, too, and serve as a call to action instead of simply decoration.

The pleasure and conceit of this beautifully designed and illustrated book reside in the unorthodox categories curator Ewing uses to reimagine and invigorate discourse swirling around contemporary landscape photography…Ewing’s lucid, accessible, and thought-provoking essays introduce each chapter and are essential for contextualizing his unusual motifs for the reader…A valuable book for every photography library. Highly recommended.

William A. Ewing has been an author, lecturer, curator of photography, and museum director for more than forty years. His many publications on photography include The Body (1994), Landmark (2014) and Edward Burtynsky: Essential Elements (2016).