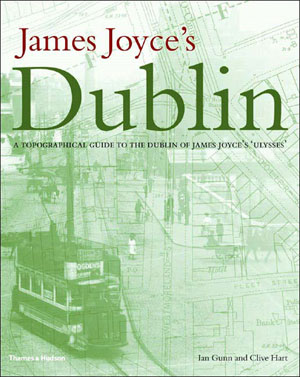 One of the most important literary works of the twentieth century, Ulysses is also one of the most realistic novels ever written. The characters, some of them Dubliners appearing under their own names, visit shops and pubs that can be located precisely in the streets of the city in which Joyce grew up. Despite the renovation of Dublin in recent decades, many of these neighborhoods and establishments remain. Published to coincide with the centenary of Bloomsday on June 16, 2004, this unique study uses more than 100 maps and photographs to examine the importance of Ulysses‘s basis in physical fact, showing how characters move around the city and how the novel works in terms of time and place. The accompanying texts include an analysis of Joyce’s use of Thom’s Official Directory of the United Kingdom of Great Britain and Ireland, an account of the characters’ movements episode by episode, an alphabetical list of the addresses of characters and places, a timetable of corresponding events, a note about unresolved problems, a detailed set of maps based on originals from early in the twentieth century, and a selection of historical illustrations. These tools enable the reader to approach more fully the perspective of the native Dubliner in 1904 and enhance the delightsand the understandingof Joyce’s great novel. 113 illustrations, including 79 maps.