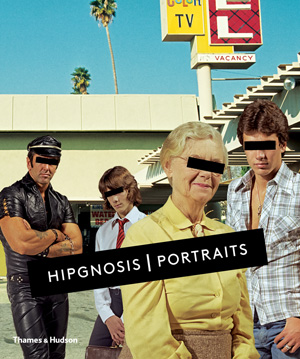 Hipgnosis created some of the most innovative and surreal cover art of the 1960s, 70s, and early 80s for the biggest names of the era—Pink Floyd, Led Zeppelin, Wings, Yes, Genesis, 10cc, Peter Gabriel, Bad Company, Syd Barrett, and Black Sabbath, to name just a few. The sublime prism cover for Pink Floyd’s The Dark Side of the Moon continues to be one of the most pervasive images in all popular culture. Hipgnosis’s highly conceptual approach and graphic appeal earned them five Grammy nominations for cover design, and they profoundly influenced not only the history of music, but also all other creative fields from advertising to fashion.

Hipgnosis Portraits explores an endless stream of creative ideas in two sections. Part I, “Imagination,” tells the story behind the artwork from germination through to the final sleeve design, supported by a wide array of archival materials. Part II, “Realization,” contains beautiful and extremely photographic portraits of the musicians the agency counted as clients. Several of these images were taken but not used for projects and have remained buried in archives ever since. The book is filled with playful, abstract compositions from a remarkably prolific collective that redefined the possibilities of concept-driven art and design.

Hipgnosis Portraits is a collection of both seminal album covers and the lost photo shoots, as well as the stories behind them—working intimately with the bands to conceive and execute their creative visions.

Pre-Photoshop, Hipgnosis pioneered double-exposure and montage techniques to turn photos into “Wow, dude!” moments…Along the way, Hipgnosis compiled a hefty file of music portraiture—clients ranging from the Rolling Stones to Olivia Newton-John—much of it unseen until now.

This fascinating book showcases the photo and design talents of perhaps the most influential design collective in album art history…Powell's recollections are as charming as the final photos are intense.

Consider it a coffee table book for rock fans who bliss out on something stronger that coffee…If anything, gazing at the charged images from Hipgnosis's glory days, I'm reminded of how much we have lost. Vinyl fanatics have succeeded in reviving the LP, but I'm not sure if commercial pressures of any sort could ever bring back the free-spirited covers that, for a brief spell, created much of the mystique of classic rock.

Powell's notes and curator photographs provide a personal tour of his decades-old flat file, sharing never-before-seen outtakes and mock-ups from some of the greatest albums of all time.

Aubrey Powell co-founded the design agency Hipgnosis with the late Storm Thorgerson in 1967. Their stunning and often surreal work established them as the most important design collective in music history. In 1989, Po was made creative director for The Paul McCartney World Tour, designing
the stage set, video wall and filmed images. He is the author of numerous books, including Hipgnosis | Portraits, and is the current creative director for Pink Floyd.

Robert Plant is the singer, songwriter, and musician famous for being the lead singer of Led Zeppelin.