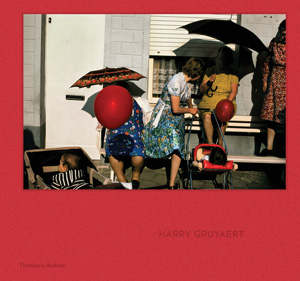 Born in Antwerp in 1941 and a member of Magnum Photos since 1982, Harry Gruyaert revolutionized creative and experimental uses of color in the 1970s and 1980s. Influenced by cinema and American photographers, his work defined new territory for color photography: an emotive, non-narrative, and boldly graphic way of perceiving the world.

In 1972, while living in London, Gruyaert created the striking series TV Shots by turning the dial on a television set at random and photographing the distorted images he saw there. A later series, Made in Belgium, portrays his ambivalent relationship with his homeland in a palette of saturated tones. In his most recent work, he embraces the possibilities of digital photography, taking further creative risks to capture light in new ways.

Gruyaert’s images are autonomous, often independent of any context or thematic logic. This volume, the first retrospective of his work, is a superb overview of his personal quest for freedom of expression and the liberation of the senses.

While the colors might pull you in, what is happening within the frame of Gruyaert’s photographs stand alone primarily because his intent is to create a narrative within a single image.

Demonstrates that color can indeed be employed to compose exceptional photographs… Ideal for anyone curious about contemporary photography, photojournalism, and, of course, color photography.

Seamless and transporting… Gruyaert is in many ways kin to Garry Winogrand and Lee Friedlander, but he works in bold saturated color… In a world filled with street photographers, these days working mostly in color, Gruyaert's is a singular vision.

François Hébel is the curator of the Harry Gruyaert show at the Maison Européene de la photographie in April 2015. He has been producer, curator, and author of numerous exhibitions and books.