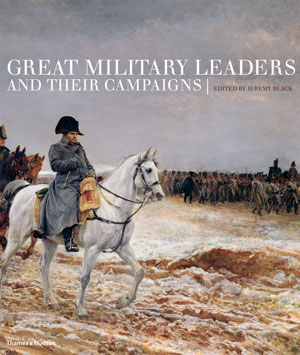 This authoritative and magnificentlyl illustrated book examines the entire history of the war through the eyes of the leading protagonists, from Cyrus the Great in the sixth century BC to Vo Nguyen Giap in the twentieth century.

Truly worldwide in scope, the book ranges from China to India to Africa, and from Europe to the Americas, focusing in detail on more than one hundred major military leaders, their associates, and their opponents. All the great commanders are here: Alexander the Great, Hannibal, Julius Caesar, Saladin, Chingiz Khan, Napolean, Wellington, Nelson, Ulysses S. Grant, Erich von Manstein, and Georgy Zhukov. So too are less familiar figures, such as Jan Å½iÅ¾ka and János Hunyadi, bold Czech and Hungarian leaders of the Middle Ages; Toyotomi Hideyoshi, the “Napolean of Japan”; and Nader Shah, the Persian conqueror of the eighteenth century.

The large format allows for a full display of the illustrations, from portraits and battlefield scenes to weapons and uniforms, plus spectacular battle reconstructions. There are specially  comissioned campaign maps for each major leader, plus a reference section that includes concise biographies of 250 commanders.

Jeremy Black is professor of History at the University of Exeter and the author or editor of many books, including The Cambridge Illustrated Atlas of Warfare and The Seventy Great Battles in History.

Lavishly illustrated… A good gift for anyone interested in military history or for the novice.

Jeremy Black is Professor of History at the University of Exeter and is one of England’s most respected historians. Black is the author or editor of many books, including The Seventy Great Battles in History; Great Military Leaders and Their Campaigns; War Since 1900; and Elite Fighting Forces.