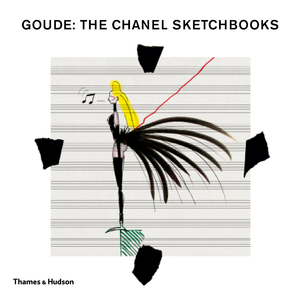 For the first time, Chanel and Jean-Paul Goude reveal the drawings, collages, and sketches that inspired Goude’s iconic advertising campaigns for Chanel’s world- famous fragrances, from Égoiste and Coco to Chanel No. 5.

Inspired by a small gold birdcage in Coco Chanel’s Paris apartment, Goude famously cast a young Vanessa Paradis as a Chanel Tweetie Pie, swinging on a trapeze to promote Chanel’s Coco perfume. He went on to make Estella Warren the face of his Chanel No. 5 campaign, and he called for the entire facade of a Riviera palace to be built in Rio de Janeiro for the first Égoiste film, before capturing Karl Lagerfeld, Lily-Rose Depp, and the ghost of Coco Chanel herself.

A must-have for Chanel lovers, Goude: The Chanel Sketchbooks also allows creatives and advertising enthusiasts to discover the imagination and creative process at work behind these unforgettable images.

A behind-the-scenes glimpse at Goude's process, from blueprint to global campaign.

Jean-Paul Goude has worked at the forefront of commercial art, advertising and illustration for over three decades. From his time as art director at Esquire, to his unforgettable photographs of Grace Jones, to his advertising work for Chanel, Kodak, Cacharel and the Galeries Lafayette, and even to his work with the latest supermodels—Goude has triumphantly captured, time after time, the spirit of his age. He is the author of So Far So Goude, The Goude Touch, and Jean-Paul Goude.