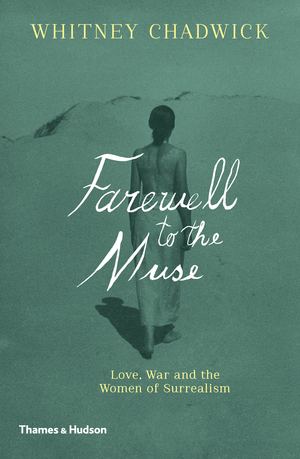 Farewell to the Muse documents what it meant to be young, ambitious, and female in the context of an avant-garde movement defined by celebrated men whose backgrounds were often quite different from those of their younger lovers and companions. Focusing on the 1930s, 1940s, and 1950s, Whitney Chadwick charts five female friendships among the Surrealists to show how Surrealism, female friendship, and the experiences of war, loss, and trauma shaped individual women’s transitions from someone else’s muse to mature artists in their own right. Her vivid account includes the fascinating story of Claude Cahun and Suzanne Malherbe in occupied Jersey, as well as the experiences of Lee Miller and Valentine Penrose at the front line.

Chadwick draws on personal correspondence between women, including the extraordinary letters between Leonora Carrington and Leonor Fini during the months following the arrest and imprisonment of Carrington’s lover Max Ernst and the letter Frida Kahlo shared with her friend and lover Jacqueline Lamba years after it was written in the late 1930s.

This history brings a new perspective to the political context of Surrealism as well as fresh insights on the vital importance of female friendship to its progress.

Concentrating on the years before, during and after World War II, Ms. Chadwick sets out to address what she calls 'the vexed question of what it had meant to be young, ambitious and female in the context of an avant-garde movement defined by celebrated men.' She explores five relationships between women ranging from supportive friendships to brief love affairs to lifetime lesbian couplehood… Absorbing… Most of the women in 'Farewell to the Muse' emerge as distinct personalities, perhaps difficult, but interesting to know.

Whitney Chadwick is a professor emerita at San Francisco State University. Among her other books are Women Artists and the Surrealist Movement and Significant Others: Creativity and Intimate Partnership.