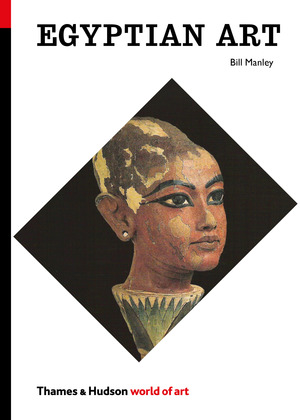 The art and architecture of Egypt during the age of the pharaohs continue to capture the imagination of the modern world. Among the great creative achievements of ancient Egypt are a set of constant forms: archetypes in art and architecture in which the origins of concepts such as authority, divinity, beauty, and meaning are readily discernible. Whether adapted to fine, delicate jewelry or colossal statues, these forms maintain a human face—with human ideas and emotions.

These artistic templates, and the ideas they articulated, were refined and reinvented through dozens of centuries, until scenes first created for the earliest kings, around 3000 BCE, were eventually used to represent Roman emperors and the last officials of pre-Christian Egypt. Bill Manley’s account of the art of ancient Egypt draws on the finest works through more than 3,000 years and places celebrated masterpieces, from the Narmer palette to Tutankhamun’s gold mask, in their original contexts in the tombs, temples, and palaces of the pharaohs and their citizens.

Bill Manley is an Egyptologist, university lecturer, museum curator and best-selling author. He teaches Egyptology and Coptic at the University of Glasgow, and is Co-Director of Egiptología Complutense, Honorary President of Egyptology Scotland and an Honorary Research Fellow at the University of Liverpool. He was formerly Senior Curator for Ancient Egypt at National Museums Scotland, and continues to work with archaeological projects in Egypt. His specialist output includes books, catalogues, articles, and exhibitions covering such diverse subjects as ancient texts, the history of Egyptology, gold jewelry, the archaeology of Palestine, and the world’s earliest philosophy.